This whole pandemic “being-stuck-in-the-house-with-your-family” thing has been head-banging hard.

I’ve gotten the FUNNIEST memes from my friends and family, and ironically…a lot of those memes are about drinking. Which I’ve done a lot of. Like all the time. These days, one can’t drink too early, too late, or too much. Too little would be a bigger problem it seems – and too picky about “what” to drink doesn’t seem to be an issue. Drink what you got.

I’ve pretty much been driven to drink. Homeschooling WHILE working from home (and having stuff you actually have to get done because people are waiting) is BRUTAL. Being a prisoner of our own homes lost its charm a long time ago. Messes spontaneously combust in mere minutes after you just cleaned up – because the family is home and bored. The internet chugs along because everyone is on it ALL THE TIME. Pass me the wine.

I decided I better lay off the wine a smidge. The 7-Eleven and liquor store down the street are probably staying afloat because of me!  I’m tired, broke, and pretty dang unhealthy.  I decided I really need to drink more water. Novel idea. It’s cheaper than wine and they say you’re *supposed* to drink water!

I hate water. I don’t drink water unless it comes in the form of coffee or wine for the most part. How the heck can I start to LIKE water if it’s not coffee or wine? But was I drinking coffee and wine because I was actually thirsty some of the time? Valid question I thought. So…I bought a new hot pot for instantly heating water. It heats up just under 8 cups at a time. I ordered a plethora of teas online (I love Amazon Prime, I’m not going to lie), and I decided to experiment to see if I could actually LIKE water somehow. 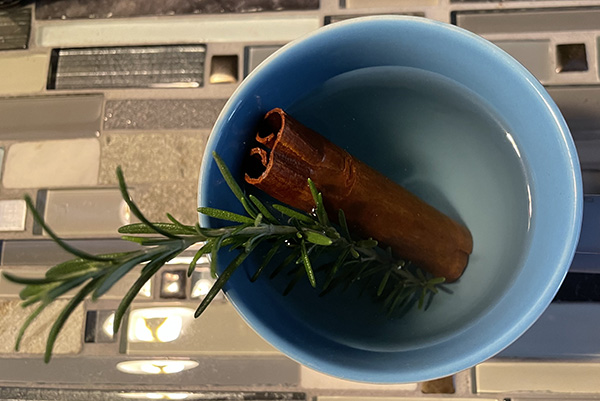 Water is officially working its way into my repertoire!

My neighbor turned me on to boiling cinnamon sticks. It flavors up the water deliciously, and it makes the house smell good. I loved the idea and tried it.  It’s pretty awesome – especially when I pair the cinnamon stick with my various teas! I’m getting crafty with other ideas, too. I have a huge rosemary bush growing out front – so I added a sprig of it and poured in the hot water. It’s lovely with the cinnamon! Who knew? I’ve been drinking 2-3 pots of water/teas daily. That’s approximately 16-24 glasses MORE of water than I used to drink! I’d say that’s a vast improvement over my ZERO glasses of water.

I have to tell you I feel better! I seem to have more energy, my mood has improved, I’m getting more work done with all the mental clarity, and I’m sleeping better. OK…so maybe I DID need to drink more water!